Skip to content
Amid all the New Year Stops and Dont’s and Giving Ups, how about adding a great big GetOutside YES!! Here are three great GetOutside Resolutions that you’ll delight in keeping:
Live. Laugh. Love.
Live
By which I mean – really feel alive. There’s something about being in the outdoors, encased by sky and ground or sea, that reminds you you’re alive. Perhaps it’s the elements – feeling hot, cold, buffeted by the wind.
Perhaps it’s the sensations – feeling the rock rough beneath your fingers. The shingle crunch beneath your boots. The mud squelch under your wellies. Being held up by, or churned about in, waves. 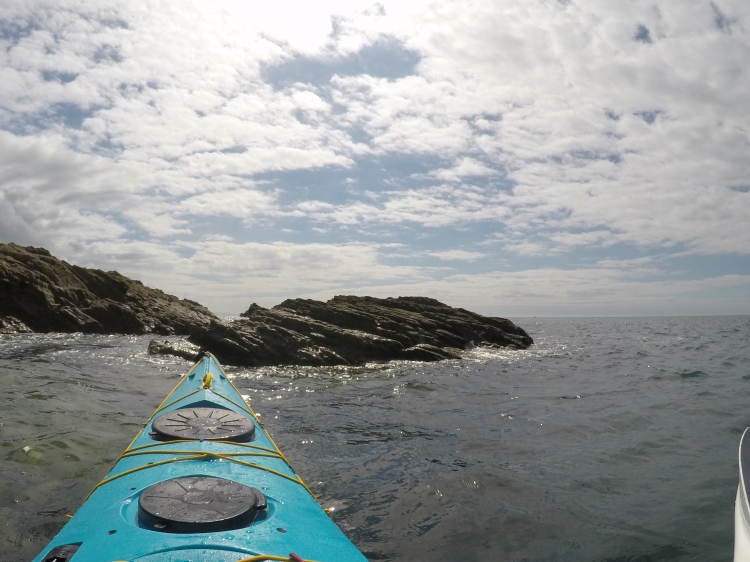 Or perhaps it’s simply because big hills can make our problems seem smaller and wide horizons can broaden the mind.

Whatever it is, it helps you feel alive.
So my first 2018 GetOutside resolution is to feel this kind of alive – to really live – at least once a week (hopefully more!).
Love
This one’s broad. It’s a bit like being alive – but here it’s about being aware that you’re delighting in something – it may be the moment, being with a group of people, or the place. And for me this tends to happen outside.
This GetOutside Love is in some ways similar to the thing we can call Romantic Love – it’s the moment when things seem right. An example is useful here. Take my first time sea cliff climbing, in Cornwall, at Bosigran.

As we stood at the foot of a crag part way up a cliff, one of the people I was with looked around and said “only birds and climbers can be here. Climbers and birds”. And I thought, or rather sensed, “yes – this feels right'”.

As with Romantic Love, even the most obtuse of us know when we’ve been walloped by GetOutside Love.

Like the time I was sea-kayaking off south Devon, researching for a Lonely Planet article on Five Classic Devon Adventures. We were shooting through gullies – slender channels between the rocks. The sea was surging a little, rising and falling with a not always predictable rhythm. We’d been going well so I was tempted to follow the instructor through what, in hindsight, was a particularly narrow gap.
Part way through the water dropped away – suddenly the thing that’s holding you up is only half there. And “half there” ain’t good if you’re in a kayak. Because you’re now tilted at a crazy angle, part perched on a rock
“Paddle!” shouted the instructor. “Which way?!” I called. “Doesn’t matter – just move!” Seconds later, I was on the other side, still afloat, heart pounding, laughing more than a little wildly. 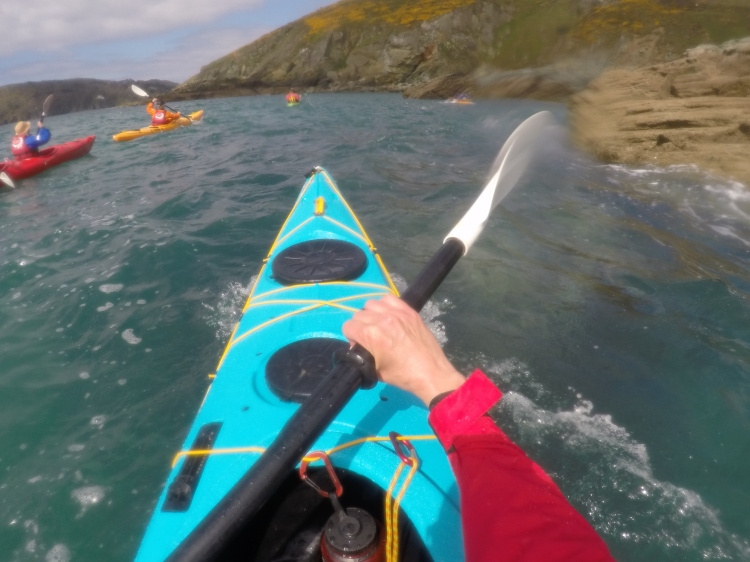 And I knew I loved this; discovering new ways to explore. It felt right.
So my second 2018 GetOutside Resolution is to feel GetOutside Love at least every two weeks (fortnightly not weekly, because falling in love takes effort), hopefully more.
Laugh
I think of this as GetOutside Eyes – that expression on someone’s face of pure delight. When they’re outside and are not remotely concerned with how they look because they’re so caught up with how they feel. You see it in some photos when people are outdoors. It’s hard to pinpoint exactly what it is – perhaps it’s the breadth of the grin, the naturalness, the gleam in the eyes. 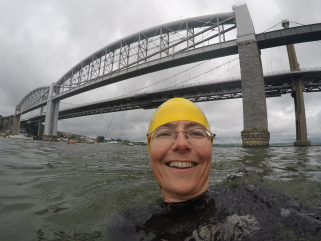 It’s easier to say what it’s not – it’s not overly-posed or self-conscious because (see GetOutside resolutions 1 & 2) they’re loving the place, the people and feel alive in the moment.

We’ve all got a kind of outdoors experience that’s likely to make us laugh – it might be walking the dog, taking baby steps with a toddler, or reaching the top of a crag or crowning the ridge of a high hill.
Or perhaps like me, it’s the moment after the first chill of a sea swim wears off and the almost-pain eases and the laughter and whooping begins. 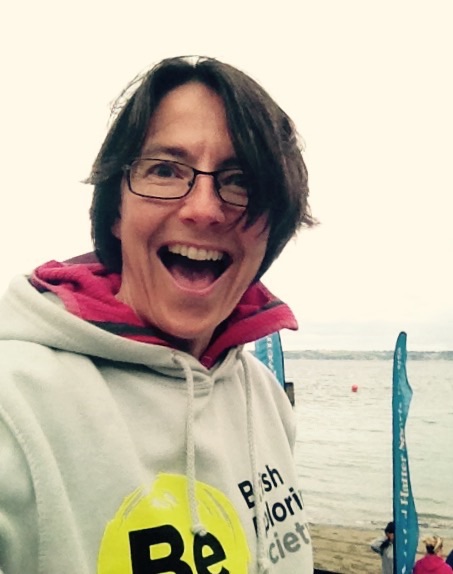 Or – as here – perhaps it’s that slightly hysterical moment just before your first biathlon when the course for the sea swim suddenly looks very far indeed.
Perhaps as for me, it comes after catching a wave for a glorious ride in. Or when warming my hands and feet beside a beach bonfire.

Whatever prompts it, you could say laughter tends to sound better outside.

So my third 2018 GetOutside resolution is to laugh and be gleeful in the outdoors, and probably whoop too, at least once a week (hopefully more).
So, those are my Three Great 2018 GetOutside Resolutions.
One’s I think I’ll love to keep.
What are yours?
Why GetOutside?
Some facts:
For more outdoors inspiration head to the Ordnance Survey’s GetOutside website. From fun family activities to extreme sports, it’s full of ideas, advice, interviews and Beginners Guides.